Time to sell off all my extra boards and parts for the UMDK, but I can't sell boards by themselves they'd need a box to keep them safe, and it's really awkward to get the UMDK in and out of the Mega Drive without a cartridge shell so it should have one of those too right?

I'll probably have 8 of them to sell, with custom coloured shells.

Original board, with tin covered pads 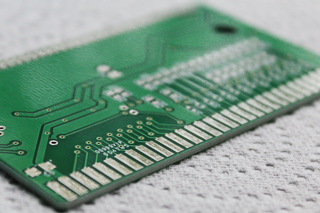 Sanded to remove the tin (easier and safer than dissolving it), sandpaper was a bit coarse which caused a minor problem later but I'll live.
Now we're left with bare copper pads 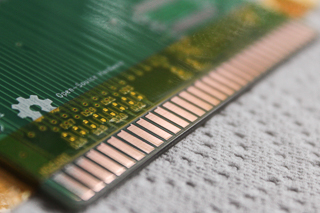 Copper tape applied and conductive nickel 'ink' put between it and each pad, so that they can be plated 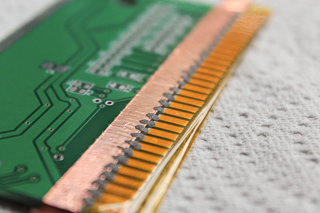 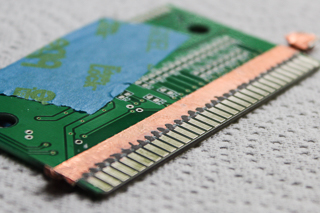 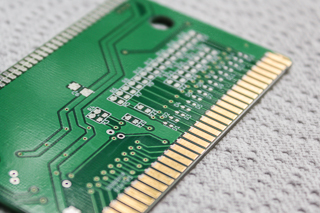 Using such coarse sandpaper (600 grit, and that's EU grit folks measured differently from US) meant there were a few deeper scratches which didn't plate very well (probably because I didn't clean it good enough). I also misplaced my titanium wire and didn't do the gold until the next day, so that didn't take quite as well as it could have (the nickel will have started to oxidise)

If I ever get more boards made, I'll add a trace to connect all of the connectors at the bottom to avoid having to link them up to be plated. Then I could simply grind away the trace.
Last edited by amushrow on Fri Jun 15, 2018 12:49 pm, edited 2 times in total.
Top

Depending on price, I’d be interested. Starting a project and from what I’ve read that hardware would be a good upgrade to other tools I’m using.
Top

This is awesome amushrow, I'm very happy to endorse your work!
Top

Count me in as well as someone interested, but I have a couple of questions - if you'd be kind enough to answer I'd be very thankful!

Would the boards have all components soldered to them amushrow, or would we need to complete (+- including purchasing of all the components) the product ourselves?
Also, sorry if this has been answered elsewhere, but the software that interfaces between the debugger and the Mega Drive through the UMDK, is that available and working? If so, would it also enable step debugging with my C code developed using SGDK, or would it be assembly only? I'm using Visual Studio btw.

Thanks heaps, it's great work you guys are doing!

I'll have to work out what the final price is once everything is all done, but it's going to be £70-£100

At some point I'll also get around to making a Visual Studio plugin for the UMDK so you can launch & debug stuff from there instead of using WinDbg or something.
Top

I will definitely buy one of these if offered to me. Please put me down on your list. P.S. I have a US console so I would prefer that this works with the genesis, but I'll buy it regardless....
Top

I'm interested for sure. already have one umdk, but not gold plated so might want a second kit. At the very least I'm interested in a cartridge case!
Top

I missed my chance the first time completed UMDK kits were available, if you're still taking names, put me down for one!
Top
Post Reply
9 posts • Page 1 of 1