It's generally agreed upon that using EEPROM for saved games is a better idea than SRAM+battery both for cost reasons and because batteries are troublesome (you lose everything when they deplete and/or change them and there's risk of leaks if you leave them for too long). But I don't think we ever agreed on some scheme for EEPROM on homebrew games? This is particularly troublesome since every publisher seems to have done whatever they felt like it and ROM header doesn't provide enough information, so emulators resort to databases and it's a pain to develop homebrew using EEPROM.

EDIT: assembled a list of $A130xx address ranges that I know are used up
https://www.plutiedev.com/a130xx-usage
Sik is pronounced as "seek", not as "sick".
Top

Having a custom EEPROM spec for homebrew is probably a good idea. Most existing EEPROM games use a single byte at $200001, and it's reflected in the header. Emulators, and the NeoMyth menu, generally look for a save ram space of one byte to auto-select EEPROM mode as no actual battery backed up ram will actually be only one byte. The header for custom EEPROM could be like the save ram spec from sega, but give an address space in $a130xx. That would certainly be easy for emulators and flash carts to detect.
Top

…yeah good point, if we use the $A130xx range which nobody else used, emulators may as well use that to autodetect the mapping instead of making up a new type. 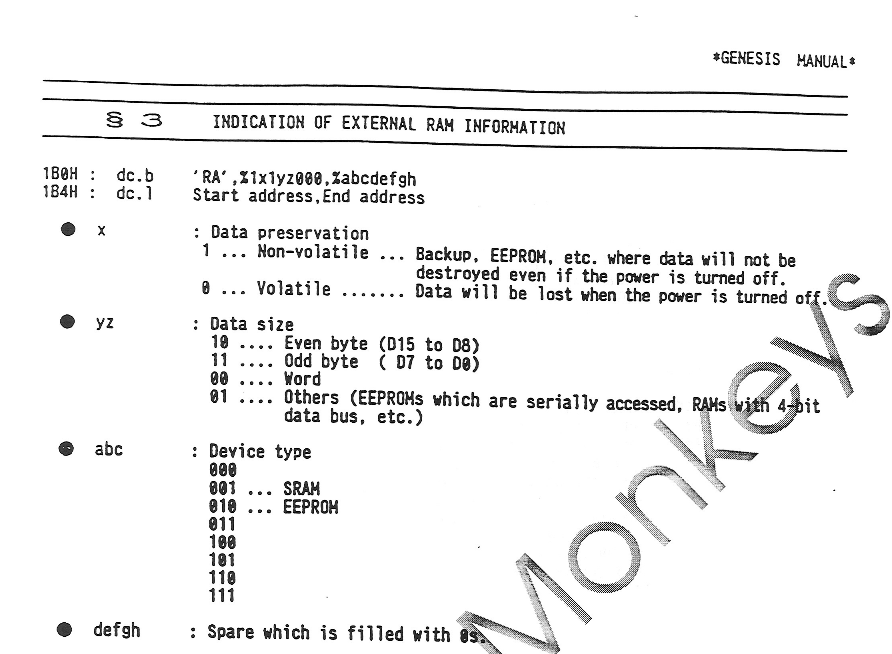 $A13000-$A1300F is used by Pier Solar for its custom stuff, maybe I'll claim that range is reserved for private use since that stuff isn't "standard".
Sik is pronounced as "seek", not as "sick".
Top

That's nice. Always wondered what some of those bits were for. Yeah, I'd say using the reserved bits for something like a shift value would probably be the way to go.
Top

My 2 cents: standardizing the mapping (i.e. which address and which I2C bits are connected where) is good, but I think allowing the size to be specified in the header is desirable. It might make sense to pick a single "mode" (i.e. how the address is sent), but from my perspective supporting any of the modes that are already used by existing games is no big deal. For the devices used in commercial games, there's a 1:1 mapping between size and mode, but that's not universally true. If you wanted to simplify the header you could require that devices that follow that relationship be used though.

The other parameter that needs to be specified is the page size. This mostly correlates to size, but Eke's EEPROM doc (which I recommend reading if you haven't already) has some exceptions. In practice, this isn't that important (I haven't gotten around to emulating the page behavior yet in BlastEm and it doesn't seem to have caused any problems), but it is needed if you want to completely specify the EEPROM's behavior.
Top

I would use an SPI or µWire EEPROM instead rather than I2C types, they're much easier to talk to (thus less hardware). Here's something I devised a while ago :

Back from laptop maintenance. I was going with the I2C ones because they were more well known I guessed? (and emulators already support some of them, which makes it easier to test) Also for reference, this is what Sega did (X24C01, SDA at bit 0, SCL at bit 1, $200001): 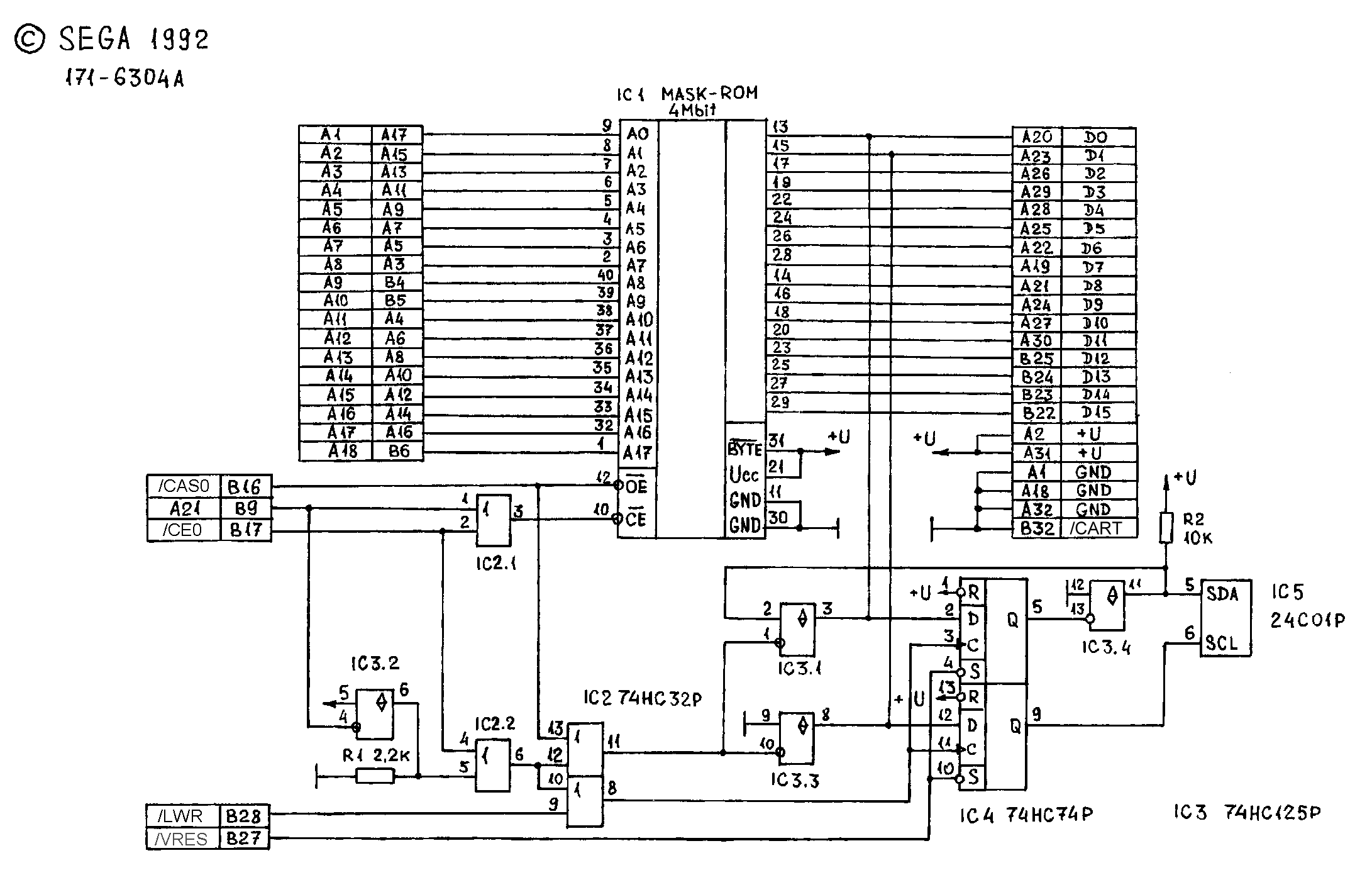 
EDIT: in fact looking at it some more it does seem that the 7432 is there mainly because of the address decoding (which is the very thing we're trying to simplify by going to $A130xx). So yeah, maybe it's possible to do away with it (meaning I2C is just as hard as SPI in this sense), though I haven't bothered to check how it'd work with /TIME so not confirming anything. Something to look into, anyway.
Sik is pronounced as "seek", not as "sick".
Top

Double post but it just hit me: I'm being dumb. Whether it's dealing with two or three support chips (SPI vs EEPROM) is not a big issue, the bigger issue was dealing with ROMs over 2MB. If left in $200001 then one would need to resort to implementing $A130F1 and that'd make things a lot more complex, but by moving EEPROM to /TIME that situation can be avoided (as ROM and EEPROM don't overlap). Kind of important since most homebrewers aim for 4MB.