Hi everyone !
I have released a new game for SegaCD based on a homebrew game i did for 3DO.
This game was programmed in basiegaxorz in case you're wondering.

You play as "Rinblow Trash" , a pony who is always in trouble.
In your quest , you will encounter falling poops from the sky and pony haters that want your death.
Will you be able to make it alive ? 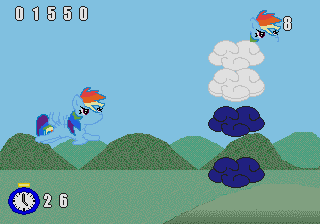 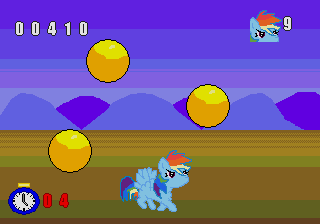 Video :
http://www.youtube.com/watch?v=pvdLnbYdDag
by Oerg866
What a useless pile of shit. Like 99% of BEX homebrew. The fact that it's "my little perversion" makes it worse.
by gameblabla

Oerg866 wrote:What a useless pile of shit. Like 99% of BEX homebrew. The fact that it's "my little perversion" makes it worse.

Seriously , this is my first post on the forum and that is how you welcome me ?
Did you even tried it ?
If according to you my game is a "pile of shit" then give me a clue you fat nerd and tell me why it sucks instead of insulting me !
This guy did this game called "Crazy Driver".
His game is even less sophisticated than most of BEX games and this game was programmed in C but that fine because it's programmed in "C" unlike BEX which is "retarded" and "useless".
Shameful.
by Stef
I have to admit that even if any homebrew is welcome i am not a big fan of quick and botched productions which have no real technical nor gameplay interest. I can understand them for a "practical" point of view, to learn about classic system development but then when you release them you make it visible in homebrew scene and you ends by having tons of trash stuff (sorry to say that)...
I actually tried your game, sure it actually works but collision and control are very lazy and not really interesting to be honest... and this is without even mentioning the fact you have to catch and eat shit (on first try i was avoiding shits)... And i am french, which make the music even worse.
At least arts are not bad and having a Sega CD homebrew is something rare which have to be encouraged

About Crazy Driver, indeed it is very simple, i'm not a big fan of the game as well but at least it's not that botched, the game is polished enough so collision are ok and gameplay is effective... there is some challenge when scrolling become fast.
by djcouchycouch
gameblabla, now that you've learned enough to make your first production, now it's time to start your next one so you can push your skills further.

Also, you should work on making sprites that don't look like copyrighted material

to make something better
by frederic

This game made me laugh. It is so weird. Mixing My Little Poney with rap is surreal humour. Is it made on purpose? When I see this, I guess you didn't make this game very seriously.

Like djcouchycouch, I thought it was your first production, but I had a look at your website and was surprised to see that you have made tons of games on tons of platforms. Some of them look good (like this one), even though I have no idea what they're worth, gameplay-wise.

Don't let the negative comments take you down. Your game is really bad, but I have seen sophisticated homebrew games that I won't name, that have left me with an empty feeling. Your game made me laugh and you didn't waste months or years to make it.
by gameblabla
Thanks for the feedback guys !
I'm kinda surprised really , i think you set your expectations too high...
I "only" worked 1-2 months on this game , i was not planing to make an AAA game...
Anyway i've released a new update and here's the changelog :

I thought i did my best with this game but it looks like i was completly wrong.
And yes , i wasn't very serious when i made this game and if i was very serious , that would be even worse.
Next time , i will be more careful and work on something more ambitious...

EDIT : A video is now available in case you don't want to download/try it.
Video :http://www.youtube.com/watch?v=pvdLnbYdDag
by bioloid
Poops? Poney?

Thumb up for your nice work!
by Christuserloeser
Nice to see a Sega CD release. I like the graphics.
All times are UTC
Page 1 of 1
Powered by phpBB® Forum Software © phpBB Limited
https://www.phpbb.com/