People of sprites mind, I come in search of answers. I have been hunting the rare and mysterious pirate known as Super Mario World 64 for genesis. I cannot find a single dump of the game that matches the video I've found on youtube. http://www.youtube.com/watch?v=ERYA2cZeokI

I've heard the game isn't that great but all that aside I want to play it for myself. However it seems the game may be difficult to dump. One guy told me he tried dumping it with the retrode but it didn't work and only dumped part of the game. I'm curious to see if the game can in fact be dumped.

If anyone has pictures of the PCB please share them as identifying the memory chip would be a great help. I imagine even if it's a glob top chip I could solder onto the cart connector (I've traced the eprom legs on a standard 42pin eprom board to the cartridge connector) and hard wire it to a ziff socket so I could read it with an eprom reader.

If anyone has tried this before please let me know so I can save myself the time. I'm just very interested in trying to get this to work.

Anything is dumpable with enough effort. I don't have a copy of this game to test, but all that would be required is to get a copy of the cartridge into the hands of someone who's got the time and skills to dump it.

You said someone tried to dump it, but only part of the game was dumped. This sounds to me like the game probably utilizes either a bankswitching system, or a protection device to prevent access to the rest of the ROM until some kind of data is written to the protection device. In both cases, the first step is to dump whatever can be dumped without communicating with the protection/bankswitch device, then analyzing the code to see what it does to gain access to the rest of the ROM data.

If you have the cartridge yourself, you could try dumping and see what you get, and post the results here. Even if only the first part of the game is dumped, that'll be enough to figure out if there's some custom hardware which is affecting access to the rest of the ROM, and if so, how to bypass it and dump the data.
Top

I'll get my buddy with the retrode to dump what he can with it and upload it here asap. I lack rom hacking abilities so I couldn't really begin to understand the patterns you'd be looking for. It may dump a semiplayable game, no way of really knowing at this point. I will be updating in a few weeks or so when the game arrives and my buddy has had time to mess with it a little.

EDIT : My friend is actually in Austrlia as well, deception bay area. Maybe I could arrange for him to talk to you about it?
Top

As far as i remember, the cartridge uses signals not supported by commonly available dumpers which indeed suggest some kind of bankswitching mechanism to access the whole ROM. I also think the M3 or CART pin (cannot remember which one) was connected to whatever is hidden under the glob-top which might indicate some controllable logic from the chip.

Anyway, the best thing you could do is 1) upload clean pictures of the cartridge boards, both side (would help figuring what signals and what address range are used) 2) upload the partial ROM dump you got when using traditional dumping method (as it most likely includes the Software method used to control the cartridge hardware and access the whole ROM).

I've found the best dumping method by far to be MoD's dumping software. I've got a modified version of MoD's software that I use for difficult carts or odd dumping cases like this, and I also have this very handy piece of hardware: 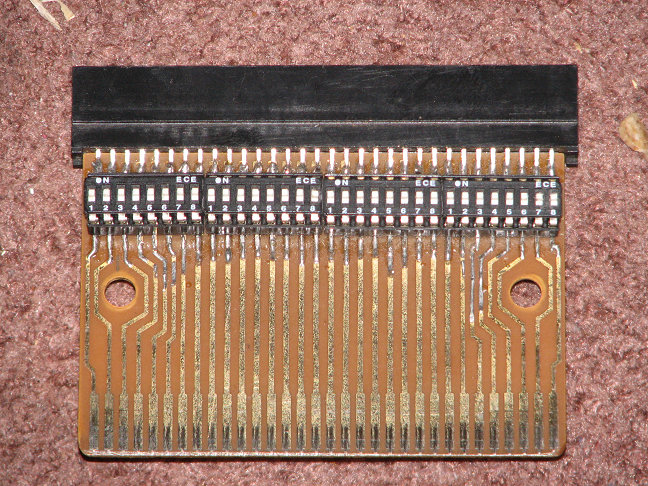 It started its life as a Honey Bee cardridge adapter, quite possibly one of the most useless Mega Drive accessories ever made. I modified it to add sockets on the front and back, which are usually filled with those mini swiches shown in the picture, which allow me to toggle lines on and off while the system is running. Very handy for dumping cartridges, I can boot up with the CART_IN line disabled, then launch the dumping software from the MegaCD, load it into RAM, then toggle the CART_IN line back on and dump it from the proper 0x0 base address. Handy for devices which do their own address line decoding like the Sega Channel, and it also allows cartridges which have bankswitching devices to easily be dumped, by using a custom version of the dumping program.
Top

You all know this is a Youtube hoax, right? Someone dubbing over the sound and adding some cheap patched in graphics to the video..
Top

I don't think it is, what makes you so confident ? It was actually confirmed by several people who owns it, it was just never dumped because of copy-protection

@Nemesis: nice stuff, it seems you can indeed dump pretty much everything with this method
Top

Have you already seen this pic?
http://bootleggames.wikia.com/wiki/Super_Mario_World_64
Top

Ah, yes, that's where I've once seen the cartridge board, I forgot about this website. A little too much elaborated for a hoax, don't you think ?

Notice that weird trace connected to the /CART pin

It also uses the following signals:

Since it has it own address decoding logic, it does not use /CE0 like usual carts which is probably why traditional dumping method will not get valid data out of it
Top

I've tried to dump the cart long ago...

It uses some kind of banking, there's only 512KB seen on MD side due to lack of more address lines on the cart I had, there's also some special strobes connected.
I did not document anything and I never got a full dump, I did not try hard either.
Mida sa loed ? Nagunii aru ei saa

It uses some kind of banking, there's only 512KB seen on MD side due to lack of more address lines on the cart I had, there's also some special strobes connected.
I did not document anything and I never got a full dump, I did not try hard either.

Where did you find one of those, local markets perhaps? If so, I could try to get one locally, would be interesting to investigate it (I have made myself a cable and ext port RAM device).
Top

Those black blobs of goo are holding bits of orphans beneath. Any cart that sacrifices orphans for extra tile layers and colors is a hoax.
Top

slobu wrote:Those black blobs of goo are holding bits of orphans beneath. Any cart that sacrifices orphans for extra tile layers and colors is a hoax.

The "black blobs" are called chip on board often called COB but what do you mean by "orphans"?
Top

slobu wrote:Those black blobs of goo are holding bits of orphans beneath. Any cart that sacrifices orphans for extra tile layers and colors is a hoax.

The "black blobs" are called chip on board often called COB but what do you mean by "orphans"?

Sorry, a bit of humor. I was saying that the only way to get graphics that good was a human sacrifice.

I didn't believe the YouTube videos but then I found the PCB pictures. Can anybody with the cart describe the differences between the SNES and Genesis versions? The videos are so good it looks like the SNES version.
Top

slobu wrote:Sorry, a bit of humor. I was saying that the only way to get graphics that good was a human sacrifice.

Little bit of Venture Bros there - the JoyBox is powered by an orphan's heart.