I was thinking about this earlier and thought it really deserved its own topic. I've never seen information about this all contained in one place, and I figured people on this board would have a lot of practical background to contribute so why not.

We all know there's a few official board revisions, some pretty rare and some more common. Not including things like the VA7 model 1 board, or the consolidation of custom chips over time, what are some of the more common PCB 'hacks' (jumper wires, additional capacitors/resistors soldered in weird places, etc) that were common on model 1 boards?

I know there others, like the little daughterboard on Japanese launch day boards and probably ones I'm not even aware of.

I'm curious why some of these were obviously patched in at a later stage in production. I understand that PCB design doesn't always come out perfect, especially when you're ramping up design of a popular game console.

The one I'm personally most interested in is the VA3 jumper wires hooked to the RAM & to another pad near the VDP, as they obviously anticipated this one--why else would they print on jumper pads instead of just printing the 'fix' on the board? My guess is it has something to do with available RAM parts and their speed as 2 of the wires go to the RAM's /CE but I'd love to know as I'm not super knowledgeable in such things. Especially since I have a board I added some 'new' (well, NOS) RAM to that isn't working correctly right now.

The main reason I think this topic is worth having around is that it makes for good service notes as well--later fixes made on later boards might be beneficial to improving older revisions as well. Particularly, as much as I love the model 1 Genesis, it sometimes seems like a really finicky, somewhat shoddy board. It might be component age or EM interference or some other factor, but MD2's seem more 'solid.' (I can't leave a mobile phone anywhere near a model 1 if it is in use, for instance.) Of course, some of this might be having more bugs worked out or more modern fabrication processes.

Hell, if I get bored enough tomorrow I might try 'undoing' the jumper wire fix on one of my other va6 boards just to see what happens.

I know this post is old... But you deserve a reply.

The daughterboard on VA1 seems to be something to control the speed of CPU access to VDP registers. Like it keep watching HSYNC pulses and stall the CPU if accesses are flooded. (not 100% sure about that) But for sure it was added after the design was complete.

On VA3 that design was completely absorbed into the bus arbiter IC.

MCE1 based MEGA-CD units use a patch board on clock oscillator with a 74LS74 IC in it and it has a 48 pin IC on the breaker board which connects the CD unit to the console: 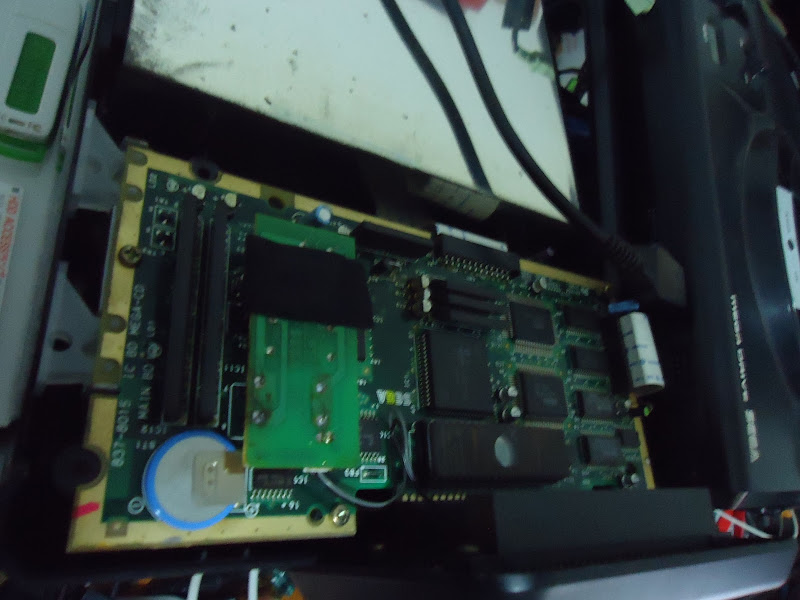 The black/gray wire pair send the clock to the chip on the breaker board.
Top

All the Genesis consoles I've seen have a few wires going to the two work RAM chips. Any reason why that is?

It seems intentional because even as the motherboards revisions change those wires remain. It doesn't seem to be a routing issue that required a few flying leads to fix.

Given that the wires required some manual assembly you'd think it would have been more cost efficient in terms of parts and production to remove them. So there must be a reason for them?
Top

I made these pictures from my VA6 Japanese MD1: 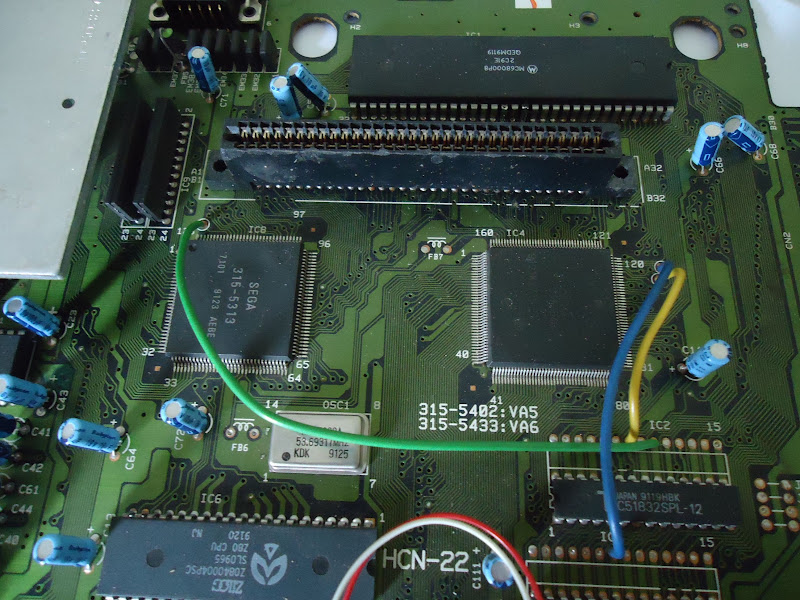 The green wire links VDP pin 119 (/RAS0) to the /CS pin on both of the PSRAM chips working as the CPU work ram.

Yellow and blue on the other side are there for the UDS/LDS feature of the 68000. I believe the gate array+bus arbiter (on this case a 315-5433 IC, an NEC custom made for SEGA) has logic in it to deliver refresh pulses through these wires while the PSRAM is not in use by the 68000. (on this particular PSRAM model the refresh signal is delivered on /OE pin while the device has /CE high) 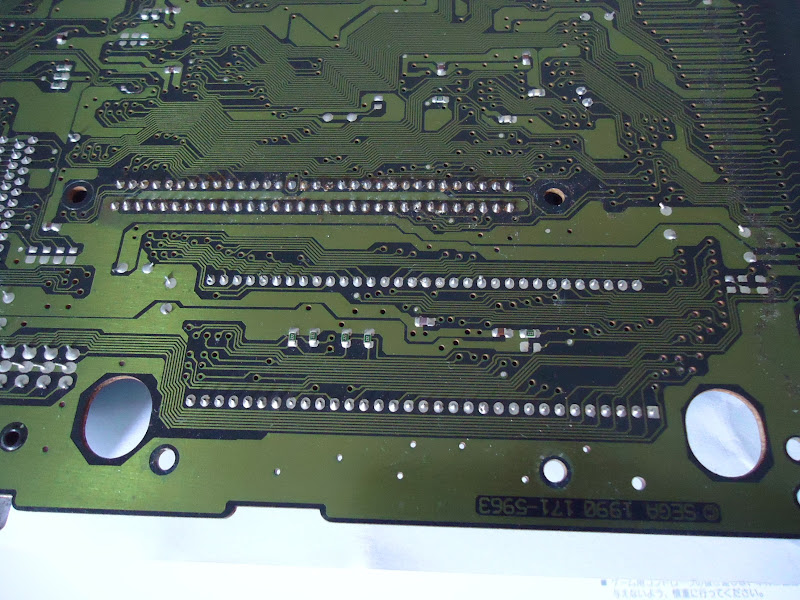 Now, the only thing I could think of that would make them use these wire links is signaling problems.
Funny that VA3 has no wires like that, while using the exact same PSRAM chips.

l_oliveira, your board looks like a VA5 to me, even though it appears to have a 315-5433.. A VA6 has slightly different copper.

I noticed in the CPU swap/mods that I did that /AS has a very high undershoot, the 220 Ohm resistor definitely helps smoothing that out.

The PSRAM wires coming from the IO chip are useless on the VA6, but (AFAIK) needed on the VA5. BTW the VA6.8 still has these wires. All 3 require the long wire coming from the VDP, looks like they couldn't route it.
Either way, those wires are the 68k ram OE signals (/NOE /EOE) which also deal with refresh, yes.

The lil board on the original MD release is to make EDClk from the 53MHz and HSync, later it migrates to a little PAL chip (which also deals with a bit of SMS/IA14) and gets integrated into the 315-5364.

On the other hand look how clean is an early MD1, a VA2: MD1 VA5 and VA6 have the exact same PCB.

What make a VA5 (exactly as it's written on the PCB) is the I/O + bus arbiter chip be 315-5402. The slightly different copper you mention is a Asian model which has built in RF modulator. That makes it look very close to the "EXPORT" (aka European/USA) models.

Contrary to what you say, removing the wires prevent the console from working/booting.

I don't think VA5s actually exist outside Japan. I did own one many years ago. I don't know what happened to it though.
Top

Jorge Nuno wrote:I challenge you to remove them on a USA/EU VA6 (the EOE/NOE wires)

That's interesting. But why keep the wires anyway ?
Top

The VAxx is near the I/O + bus arbiter chip.

Here's a picture of someone else's VA5:

So that VA6.8 was released when they were almost ready to switch into the chipset with VDP+Bus Arbiter+I/O chips on the 208 pin SMD thing ?

I did not know about that type. PAL only perhaps ?
Top

It's quite rare yes, I had one and yep it was PAL. No idea if it ever came in NTSC
Top

Jorge Nuno wrote:It's quite rare yes, I had one and yep it was PAL. No idea if it ever came in NTSC

I've never seen it. And I've seen units from all over the world. Of course PAL stuff is rare here. I bet Asian stuff is quite scarce in Portugal. Is that true ?
Top

Somewhat. There was something weird back then in the old times where we got asian games with megakeys, and I think asian MD systems too, but I don't remeber details